Aurelia is 29 and will die soon. Because it is her decision.

In the Netherlands, where Aurelia lives, euthanasia is allowed since 2002. Every year several thousand people end their lives there legally supported from a doctor, because their pain is unbearable and there is no chance for recovery.

When is the suffering too much to live on?

Aurelia is physically healthy, she is still able to live on for a long time. But she suffers from serious mental illnesses. Aurelia has (among other chronic diseases) borderline, depressions, various anxiety disorders, eating disorders. She puts glass into her body, squeezes cigarettes on her arms and sprays deodorant in her eyes. Since she was 21 she tried to commit suicide several times. She says, „In my head is a monster that sticks me with a hundred knives.“ She tried to fight against her illnesses many years. She made all possible treatments and therapies. But the monster is growing more and more. She says, „I would love to live, but I want to end my suffering! The only way to reach this point for me is to die.“

Although euthanasia is legal for mentally ill people in the Netherlands, doctors allow it just in a few cases. Aurelia says, „It’s my life, my pain, my decision, my death. If people with cancer are allowed to die, why not me, too?“ She describes her illness as invisible cancer. She had been fighting for her permission to die already for eight years.

In the media suicide is reported just in few cases, for a good reason: to prevent further suicides. Aurelia says she does not want people trigger to kill themselves. She wants that those, who really want to end their lives because of suffering, get the chance to die self-determined and supported by a doctor. Not alone, not after a self-mixed overdose, not after a jump in front of a train, not after a jump from a high building. But at home, in their own bed and surrounded by their loved ones and in dignity.

On the 31th of December 2017, Aurelia receives a phone call from the clinic: she is allowed to die, in 26 days.

The doctors of the euthanasia clinic have certified that Aurelia`s fight for healing is without any prospect of success. Is this a scandal? Or is it time to talk about the matter that also mentally ill people can reach the point where their suffering is unbearable, and it should more ethical to help them ending their lifes in order to relieve their pain and suffering? Not everyone with the wish for euthanasia receive it, even if most critics fear it: the majority is rejected. In the clinic, which granted Aurelia`s application, 614 of the 679 applications of mentally ill people were denied in 2017.

I accompanied Aurelia during her last weeks untill her death. 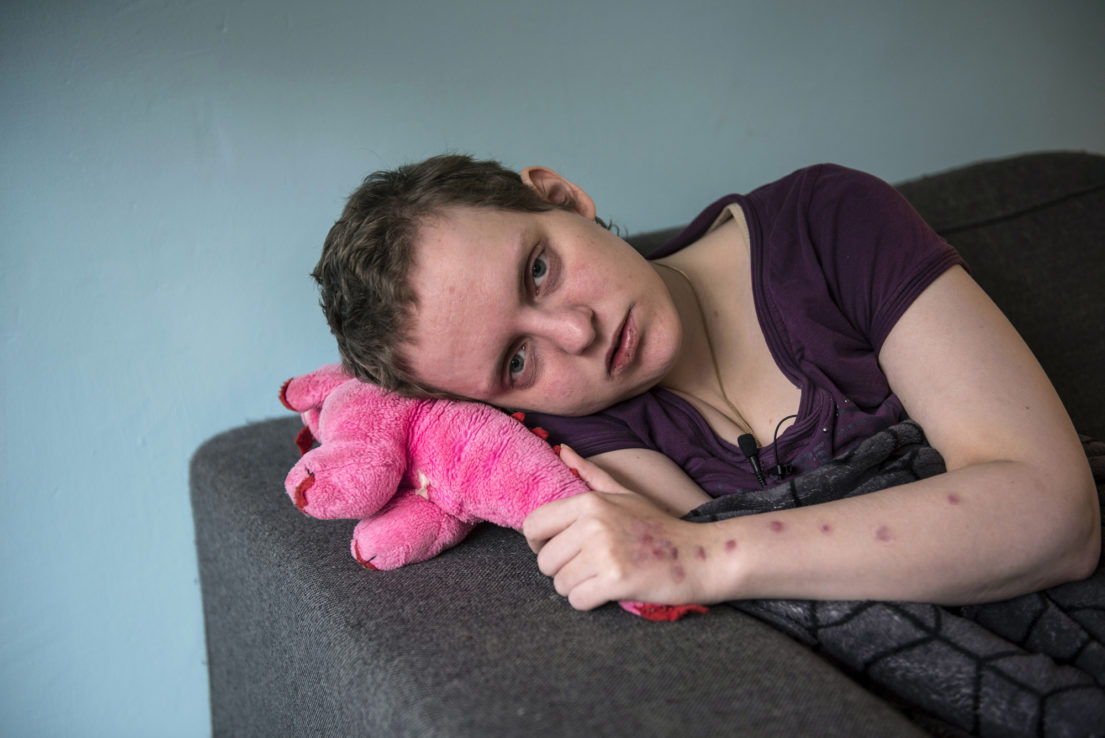 „In my head is a monster which sticks me with hundred knives. I fight 24 hours a day not to hurt myself. Not to damage myself. The only thing I think about is let this be over!“ 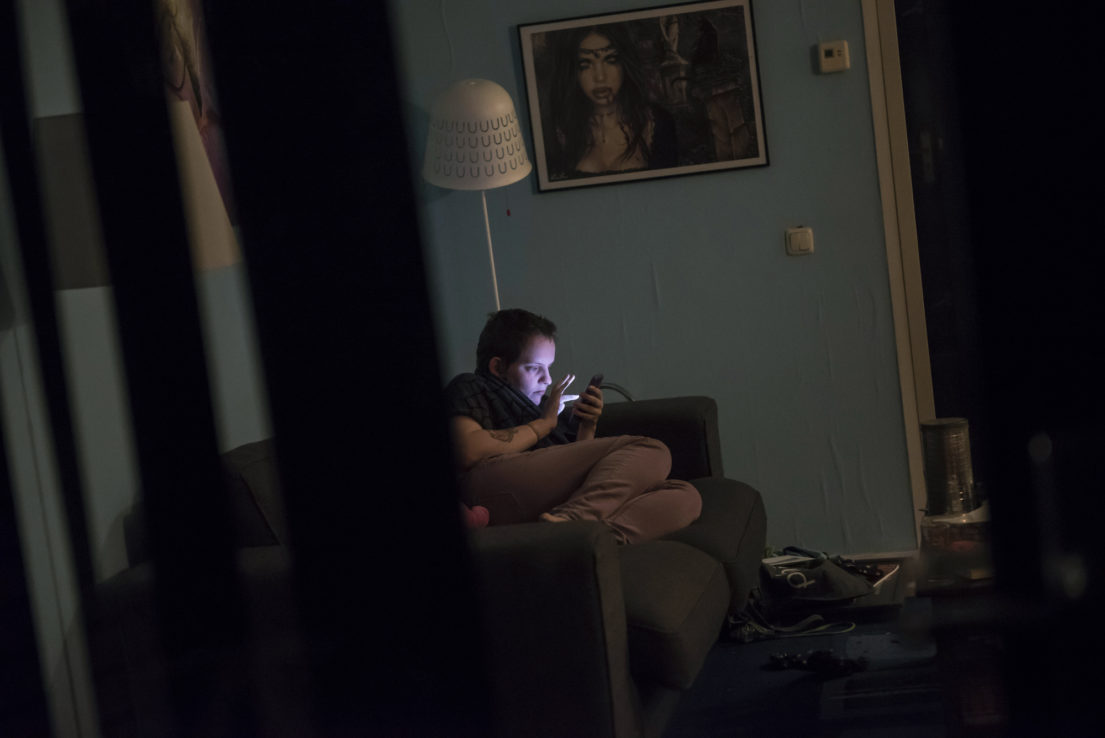 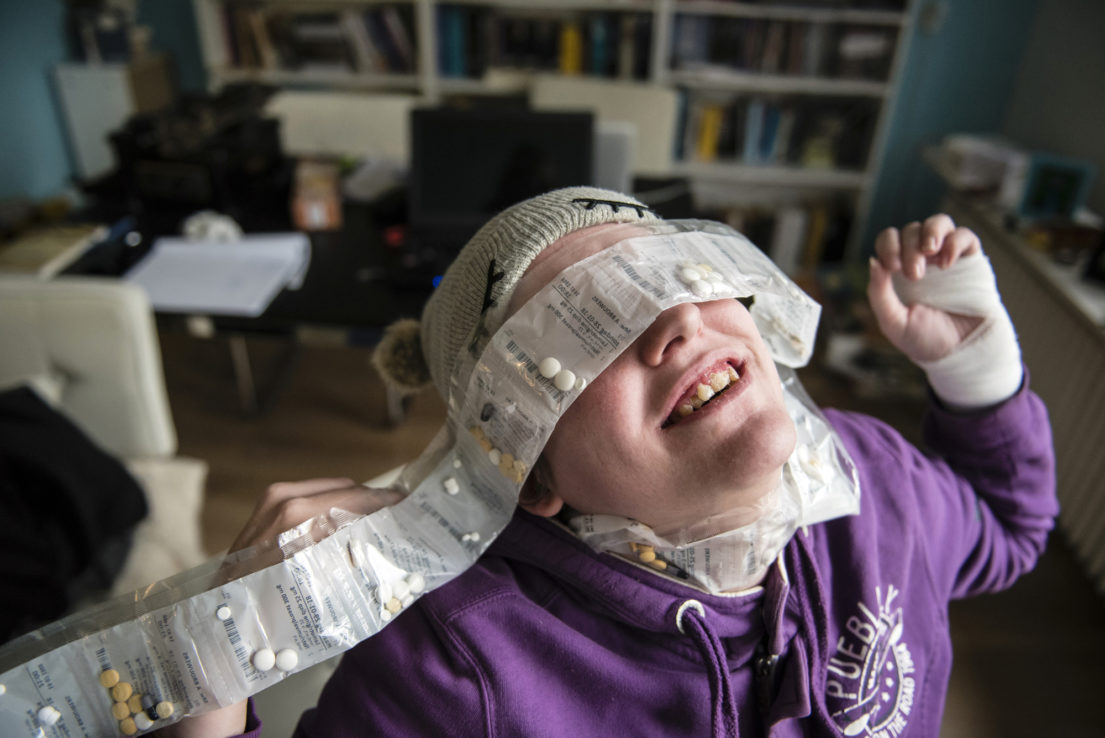 "I am the queen of the pills“, she laughs. Aurelia has to take around 22 tablets each day, but she rarely takes all. She collects some for the case she wants to commit suicide. 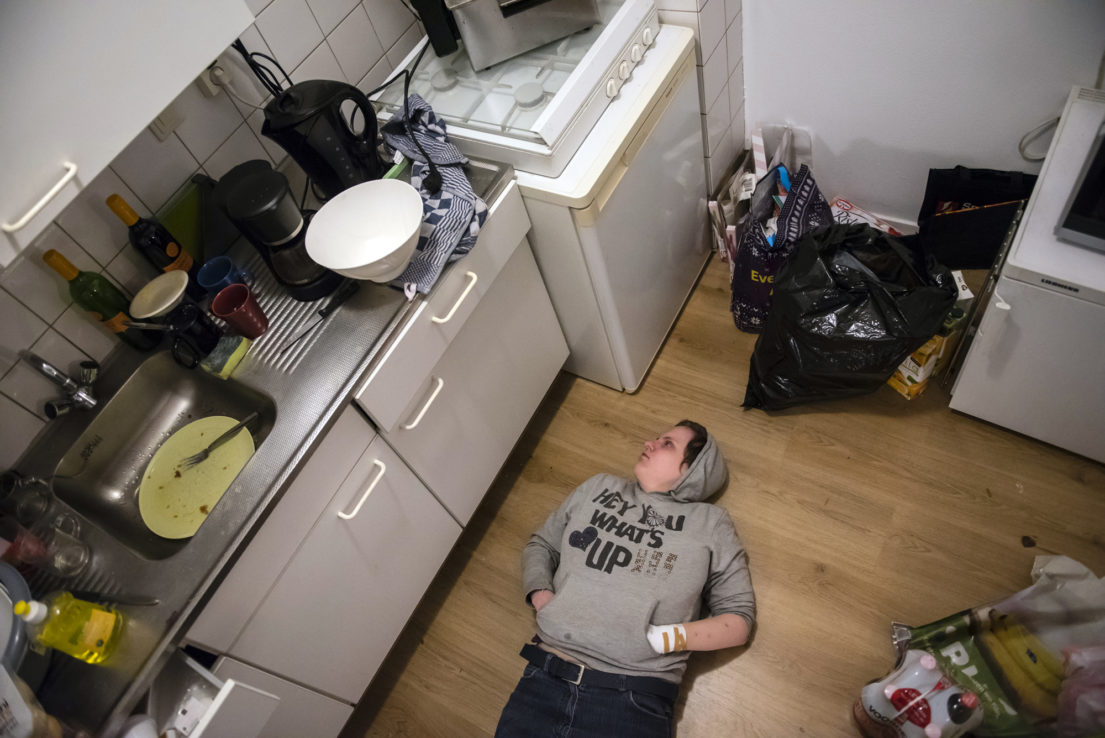 “Meanwhile I feel less physical pain afterwards, if I hurt myself. So I hurt me more and more.” Aurelia lies on the kitchen floor after she sprayed deodorant in her eyes. „What you see is not Aurelia anymore. This is not me. This is just my illness!“ 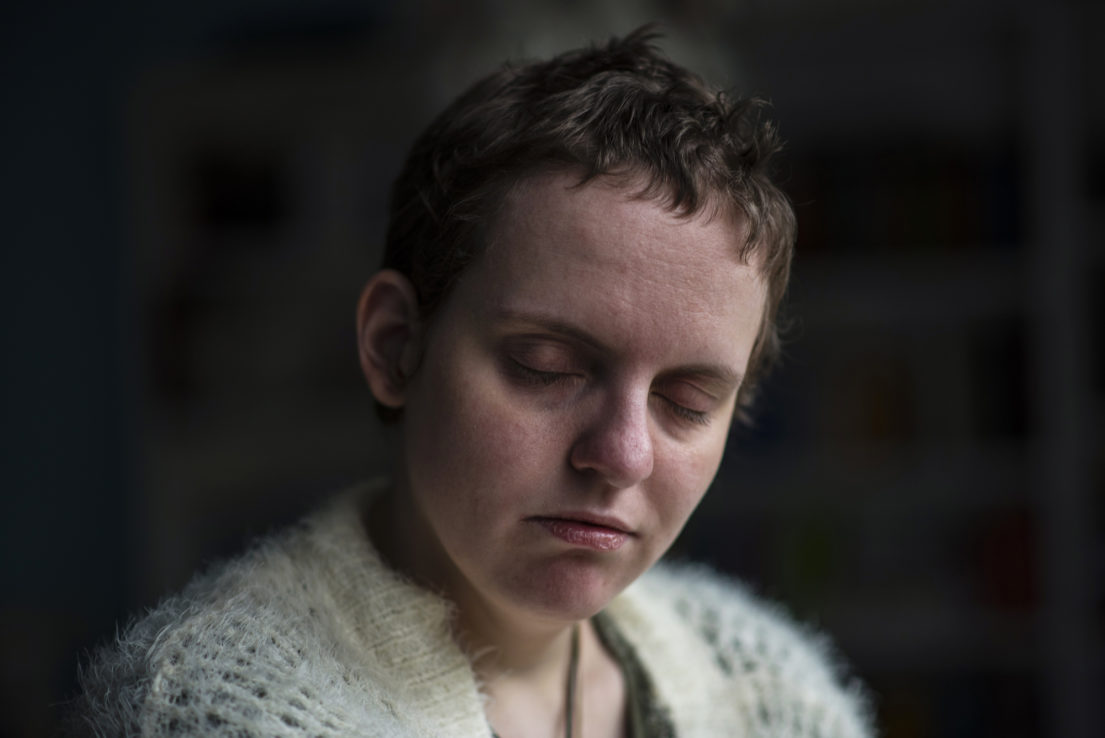 „I want to die since 8 years now. January 26 will be my day!“ #finallypeace" she wrote on her blog some days before her death. 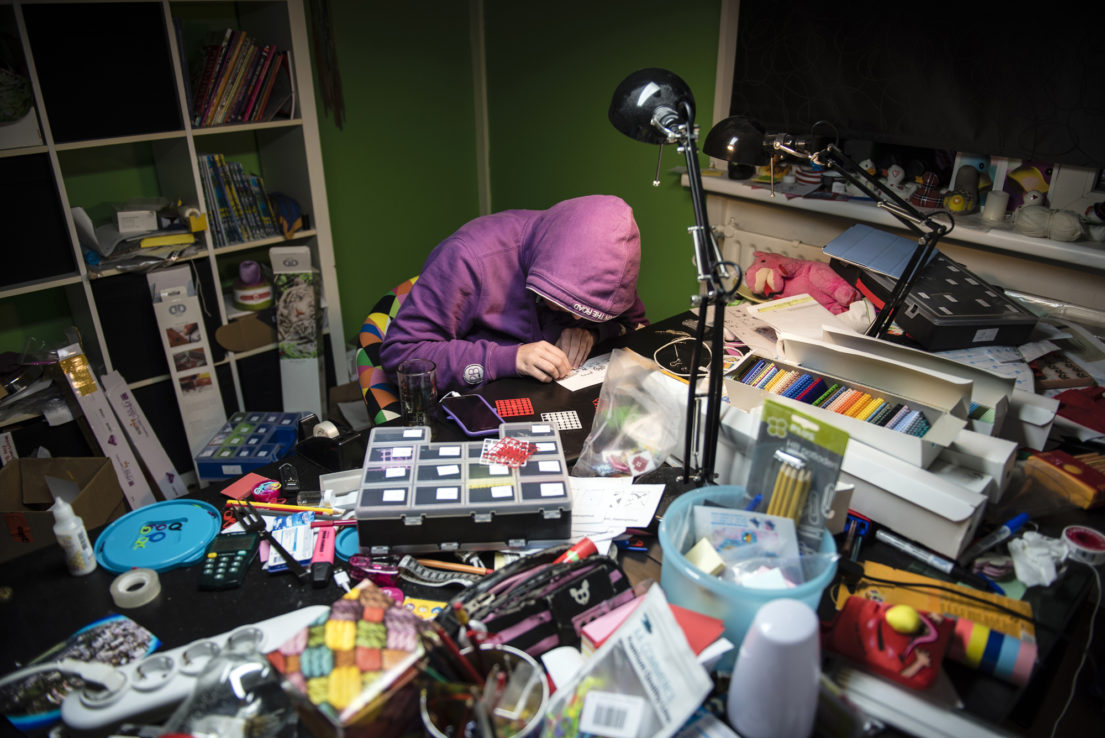 At night Aurelia works in her hobbyroom because she can`t sleep. 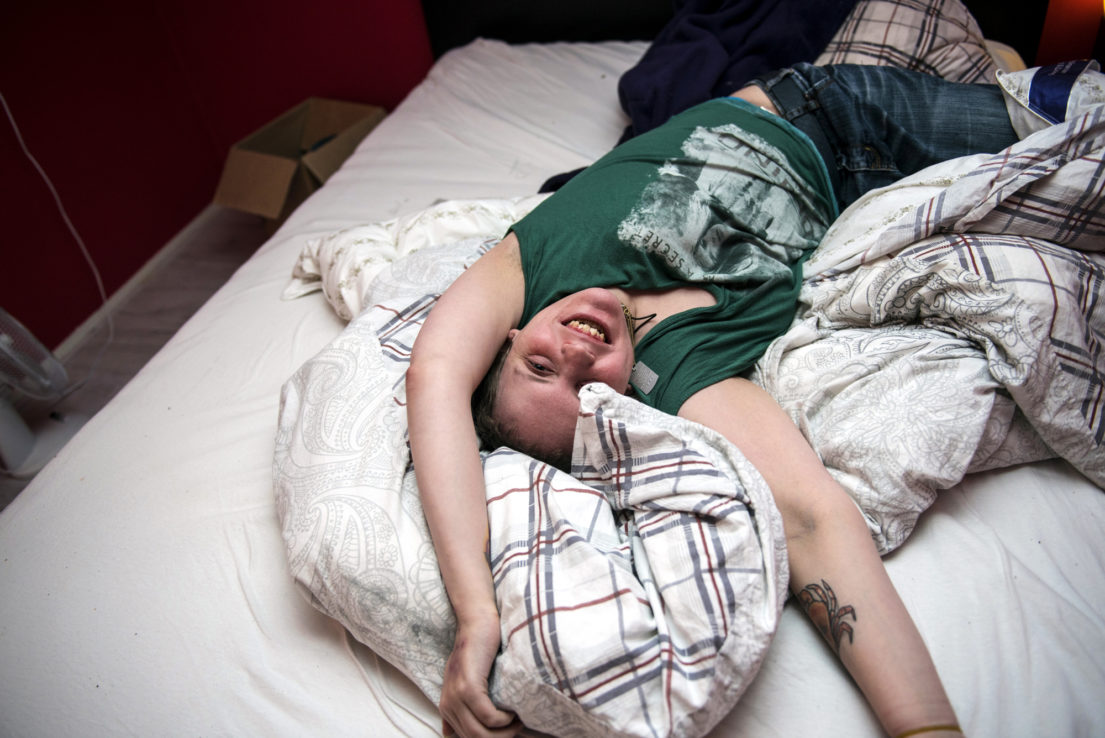 Aurelia lies laughing on her bed. „I am able to love and have fun sometimes, but I am not able to live without pain. I still enjoy music, be together with friends, enjoy my hobbies. People think if I can still enjoy that I can also live if I just want. But that is not true. I don´t live, I survive!" 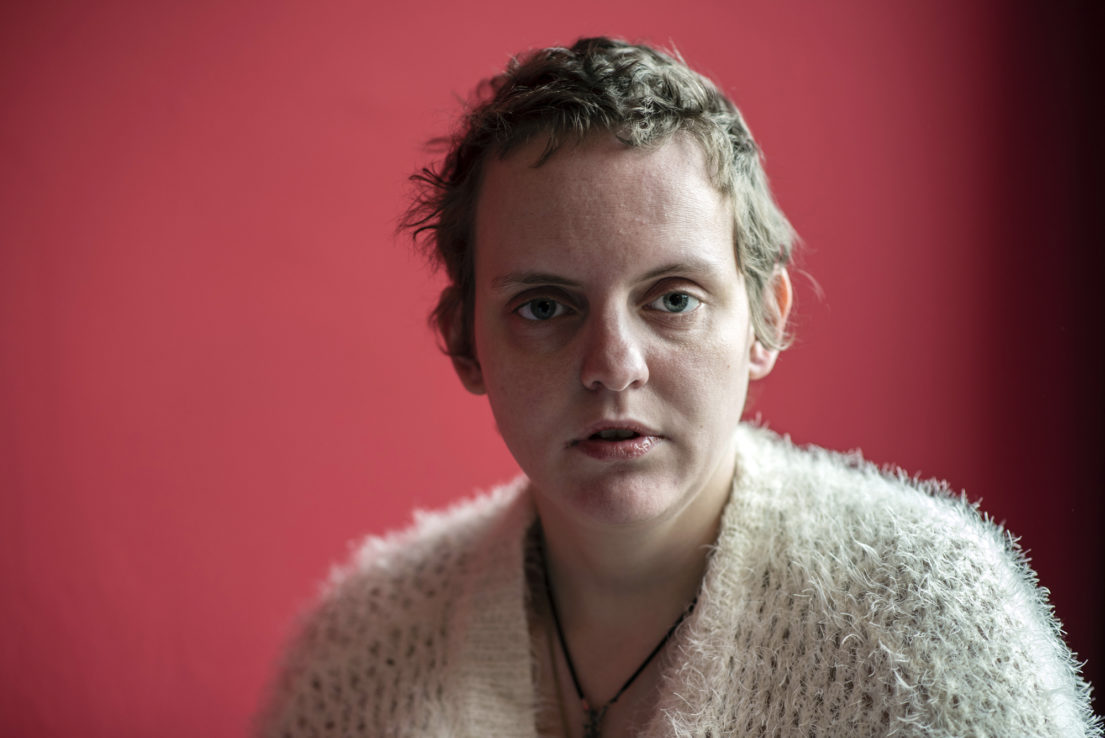 „I don´t want to trigger people with my story. But I want to break the taboo about it and I want people try to understand. Mentally healthy people have no idea about the pain in my soul. My illness is not different than a physical illness. I am over-treated, there is no hope anymore. I want to end my suffering, I just want to die in dignity.” 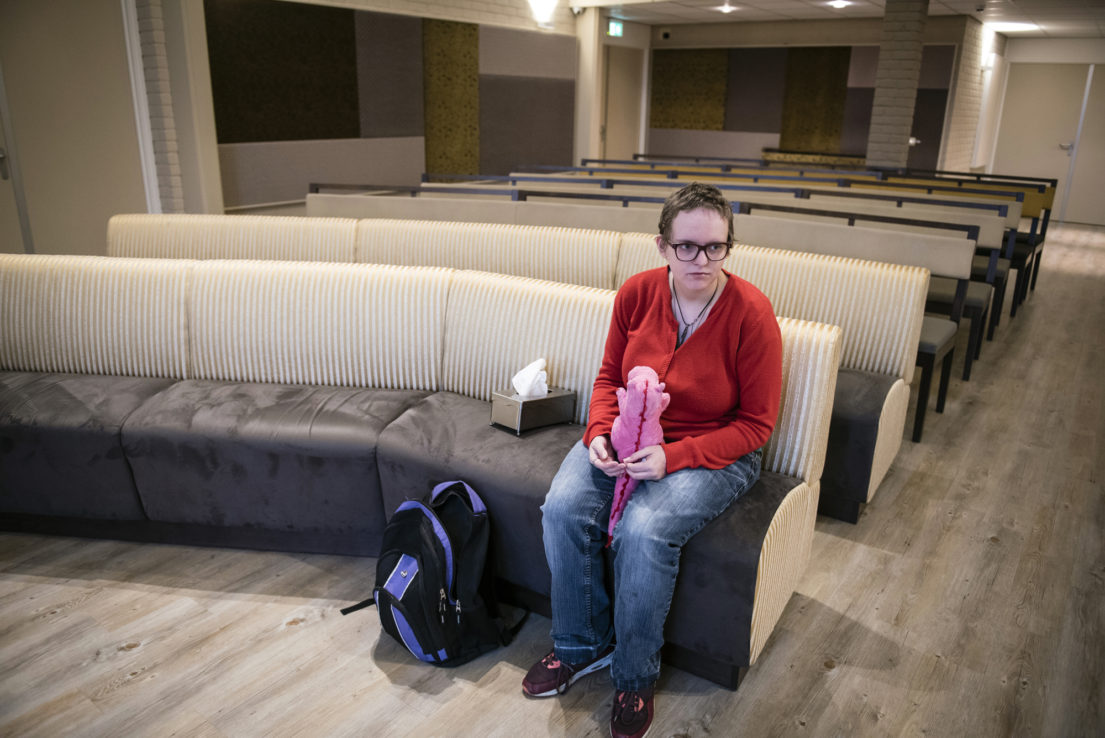 Aurelia is sitting in the crematory. She wants to see it from the perspective of her guests. This is part of her process to realize that her death is coming closer. 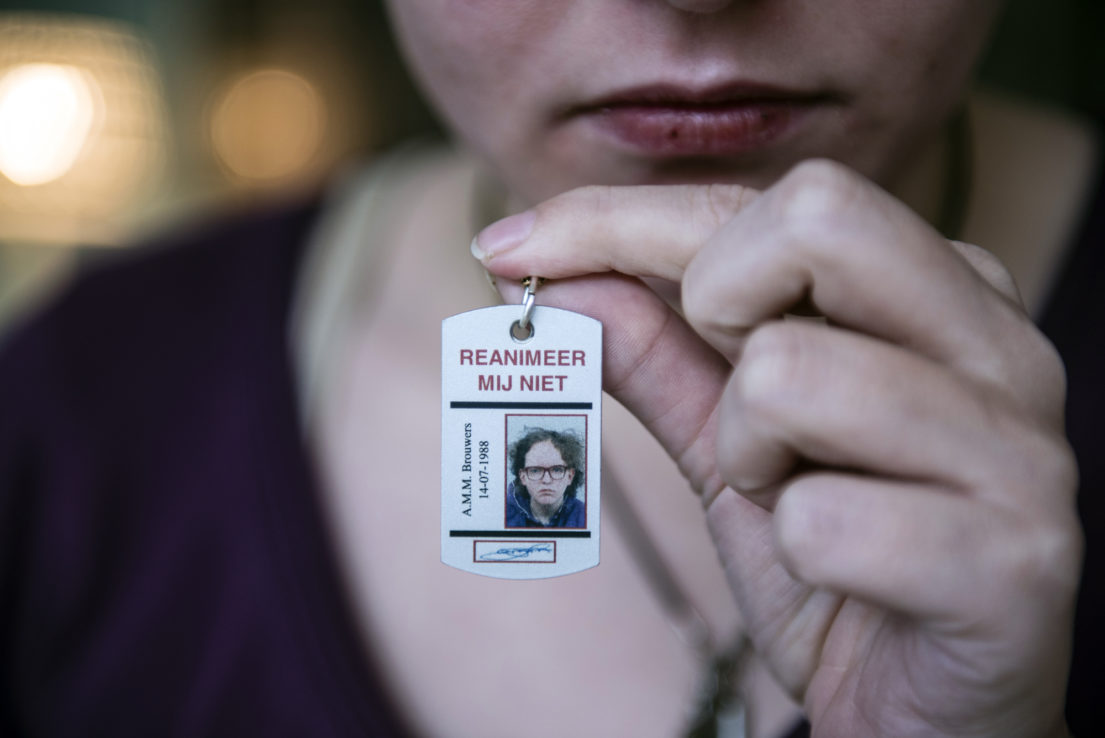 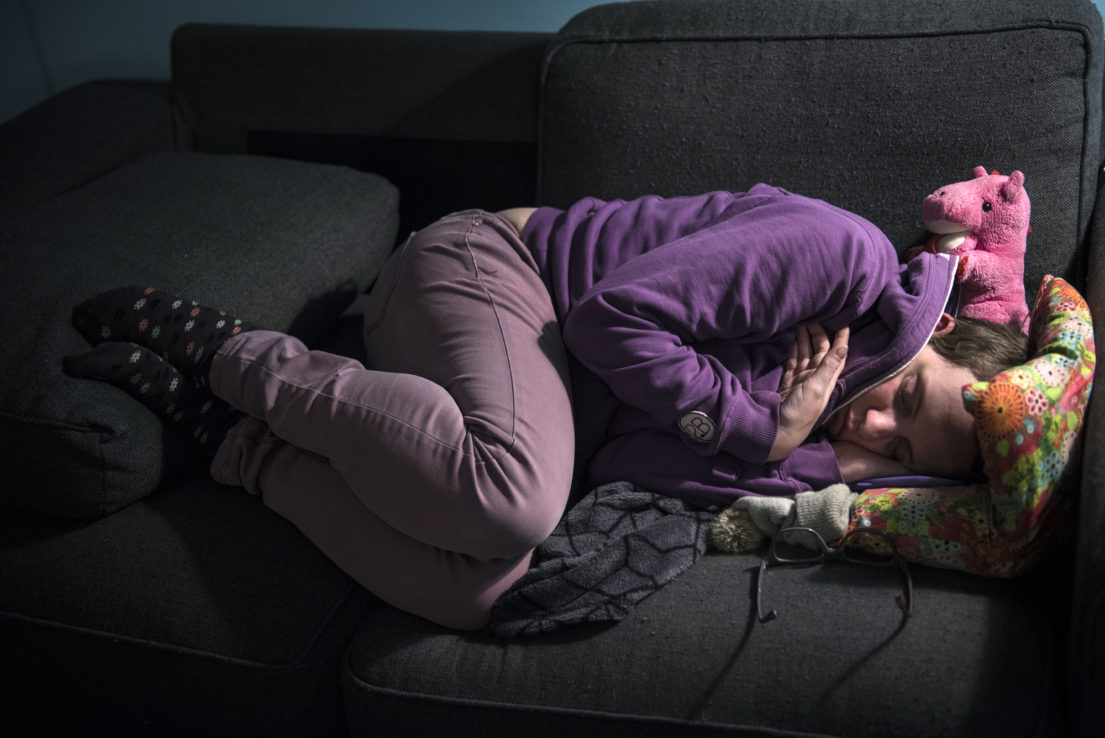 Aurelia sleeps on the couch. 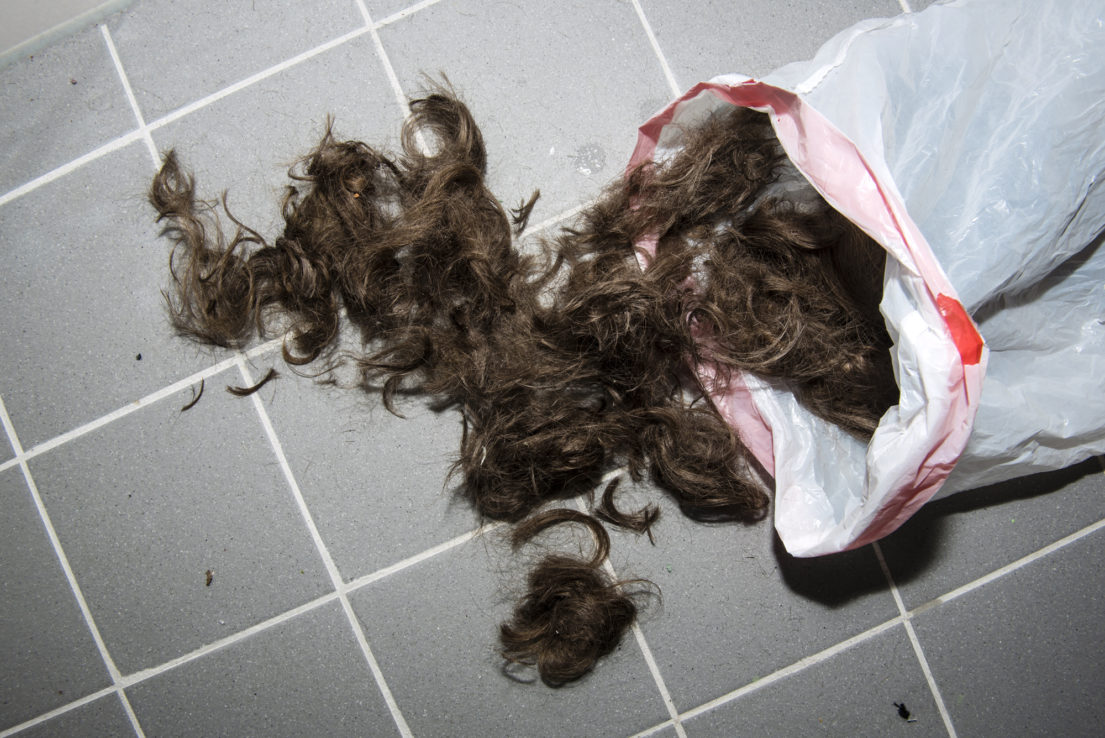 Aurelia puts her hair out of a plastic bag. One day she woke up and realized that she has cut her hair at night when she was in a dissociative state. 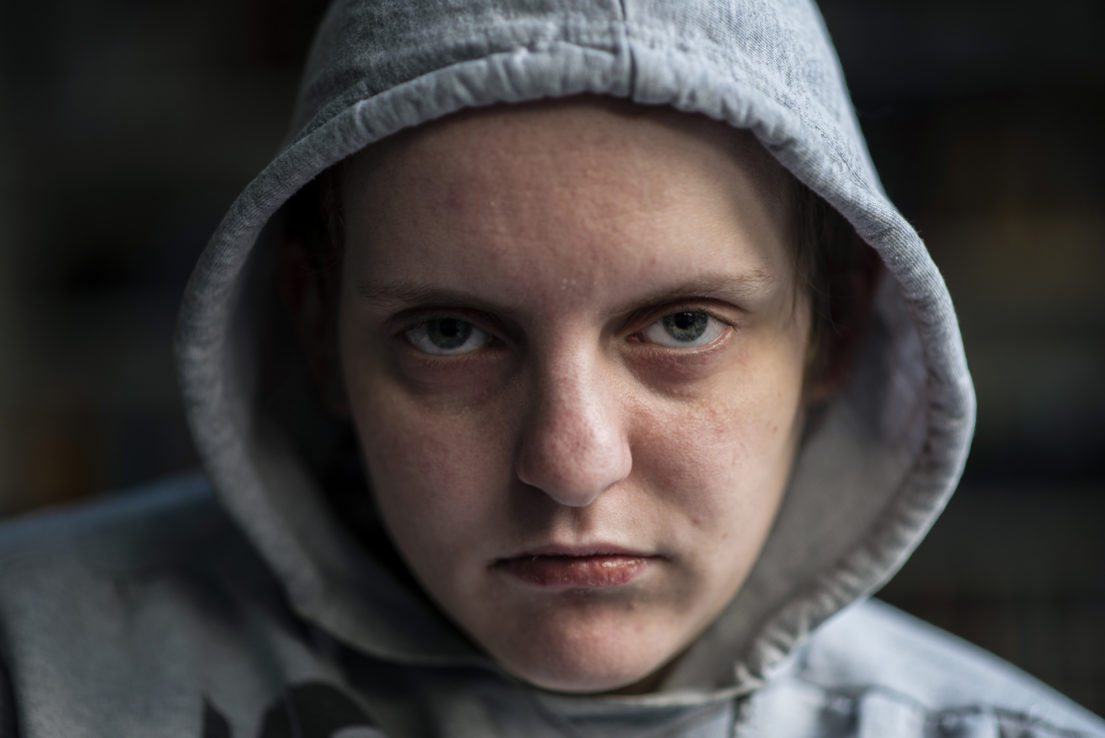 „I am very destructive, not only to myself. I am not proud of that.“ 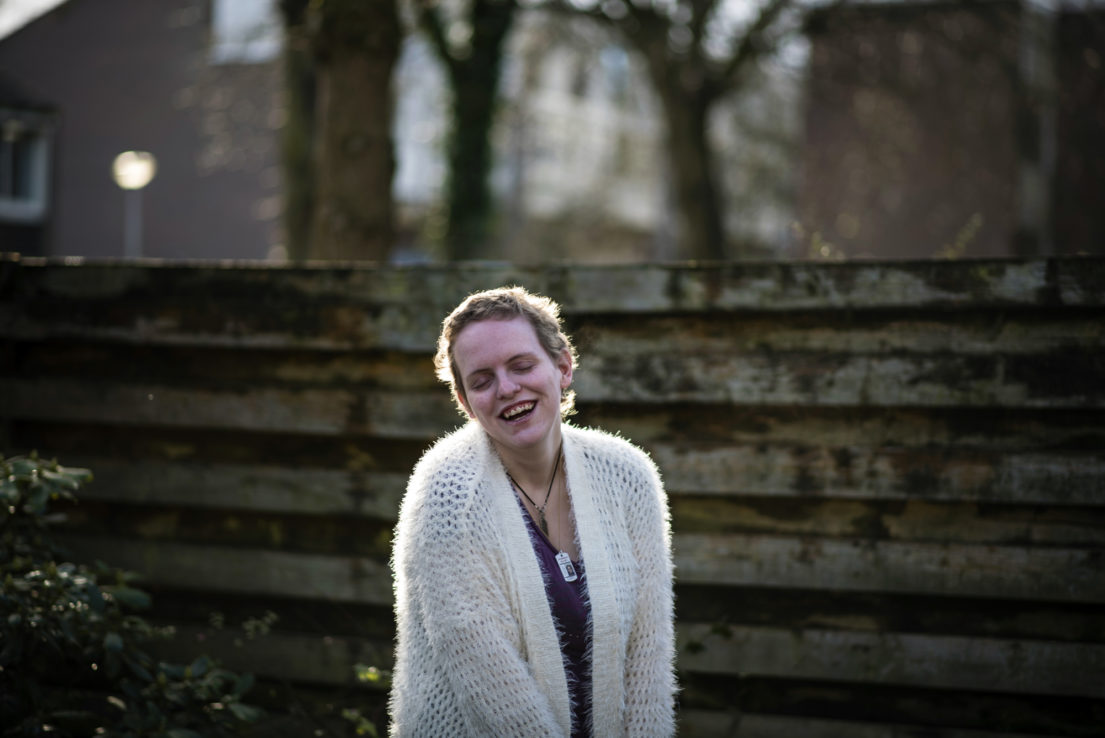 Aurelia is laughing in the garden. It is part of her illness that her mood suddenly changes. 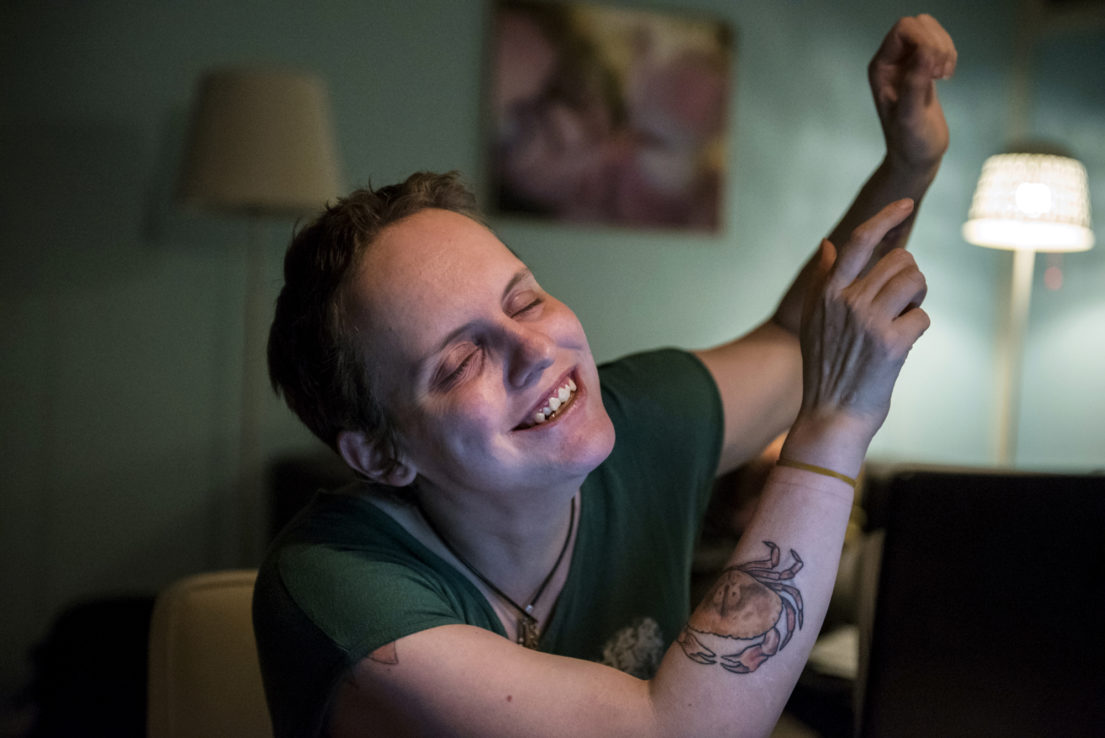 Aurelia is listening to the music. 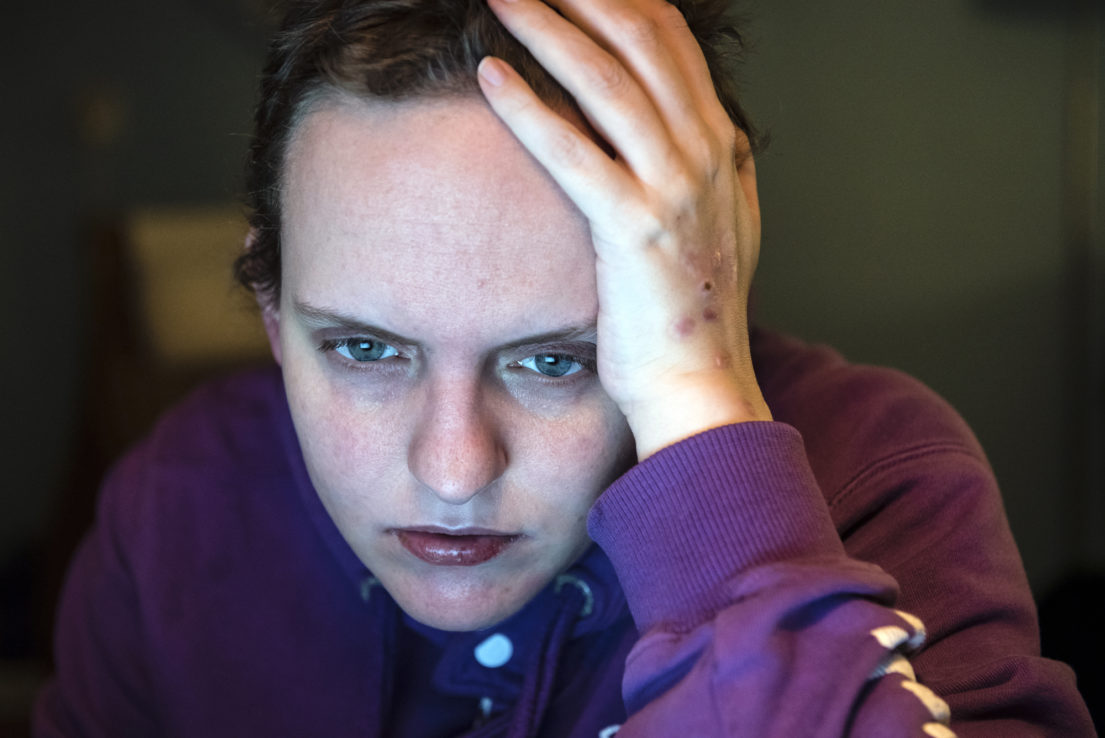 Aurelia reads her messages on the computer. “I wrote on facebook that I am going soon to my dead mother. Someone responded: "You do not go to your mother, you go to hell!" I thought: why do you say such nasty things to me if you are so religious? I am evangelical. I know that god loves me. God is love. I don’t believe in hell after death, it doesn’t exist. I believe that God will receive me with open arms. Hell? That is what earth means to me.” 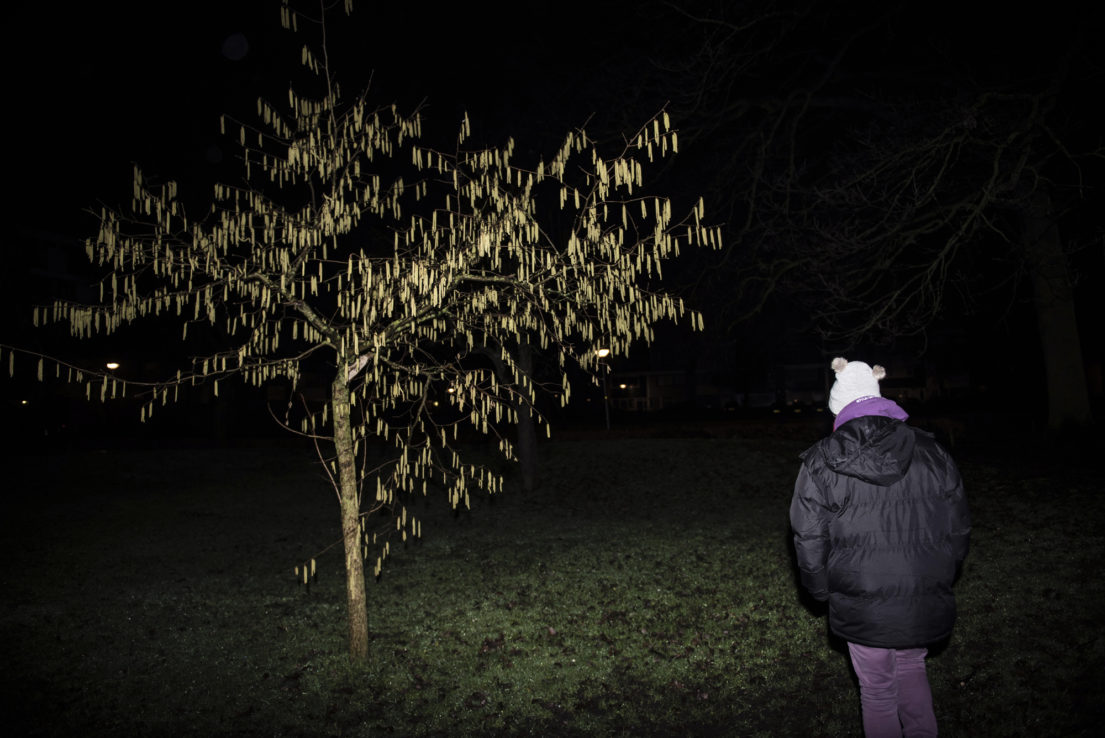 Aurelia goes out for a walk at night. “I go somewhere to clear my mind, but I get easily lost. When I am in a dissociative state I am confused and I don´t know my way back. Then I lie down to sleep somewhere until people call the police to bring me home.” 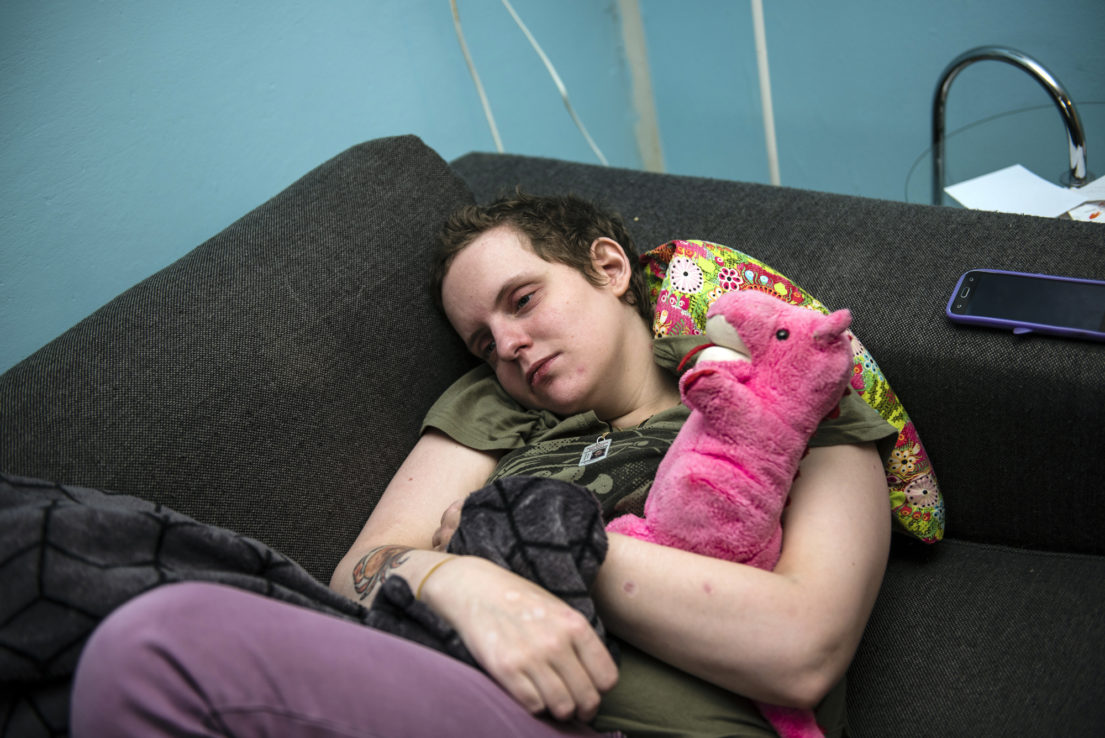 Aurelia lies with stuffed animal Dido on the couch. She has sleeping problems. Sometimes she stays awake for more then two days. She gets nightmares when she sleeps. Usually she hurts herself during the night. 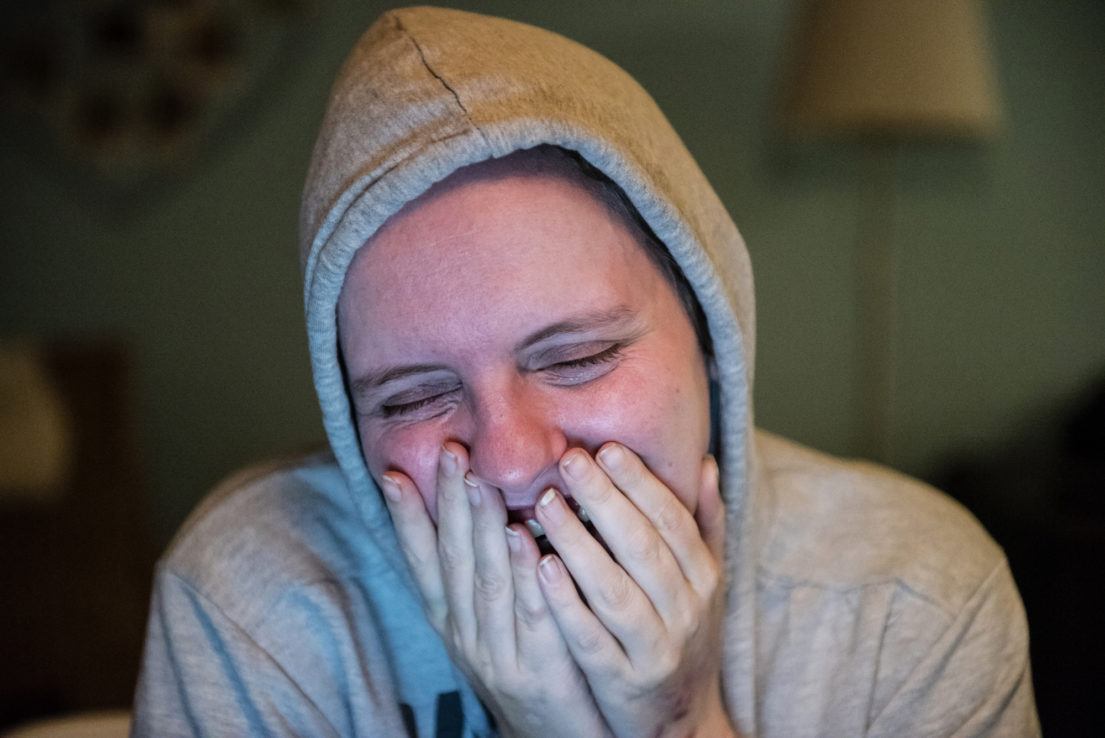 Aurelia reads a message on facebook from someone she doesn´t know. She smiles because he wants to light a candle and change his profile picture on facebook for her on the day she dies. 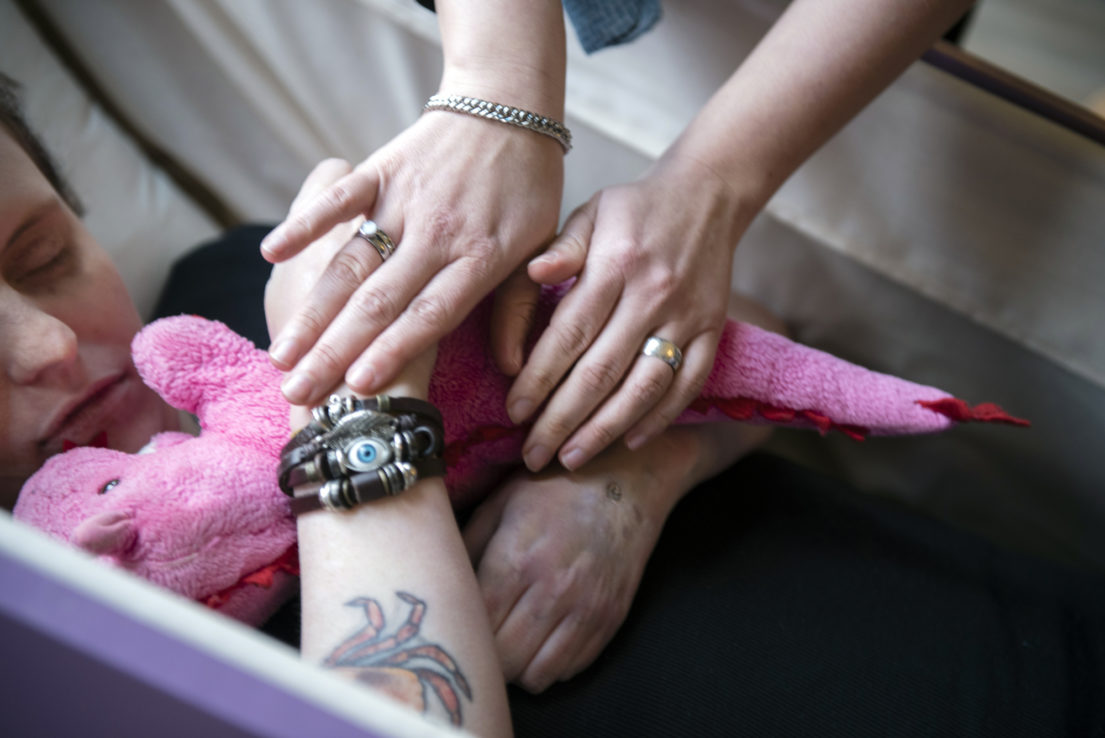 Aurelia lies with stuffed animal Dido in the coffin. Saying goodbye was the hardest part for her before her death: "You see each other for the last time and what do you have to say? Bye? Or black humor: I come to you as ghost after my death?“
© Sandra Hoyn